Irish rugby star Brian O’Driscoll recently made a surprise visit to Hair Restoration Blackrock (HRBR) to show support for a young rugby fan who received a hair transplant. Shane Corrigan is a 14 year old boy who suffered with a congenital scalp condition. Shane had to undergo multiple surgeries on his head as a baby, which resulted in significant scarring on his scalp. 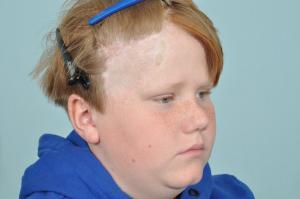 In early 2013, Shane was referred to the team at HRBR by a specialist plastic surgeon. It was agreed that HRBR’s surgeons would use their expertise to transplant hairs into the scar area, thereby camouflaging it. Following two years of extensive consultations and planning, Shane and his parents returned to HRBR in July 2015 for final preparations in advance of the procedure.

On a bright July morning, Shane was met by Dr Maurice Collins, hair transplant surgeon at HRBR and brought into the consultation room. Here the initial 20 grafts, transplanted 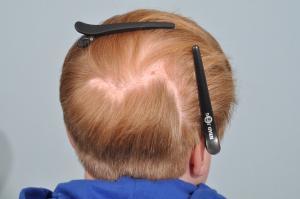 into the scar as a test, were checked. These had healed very well and started to camouflage the scarring that had caused Shane to feel self-conscious over the years. It was decided that Shane’s full hair transplant would take place at the beginning of August. Excited about what the surgery would mean, rugby fan Shane had one major concern – “When can I put my scrum cap on?”

Little did Shane know that HRBR and his parents had a massive surprise in store for him – Irish rugby legend Brian O’Driscoll. As Brian’s dad and Dr Maurice Collins are old friends, he had heard about Shane’s case and wanted to show his support. Brian surprised Shane midway through his July visit and spent time talking to him about rugby, as well as surgeries he had gone through himself. He discussed how important it is to embrace difference – to be proud of the battle scars that make us who we are and tell our story. Brian also joked about Leinster’s shaky season and the need for young supporters like Shane to be in the best possible shape to cheer them on. 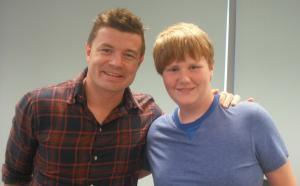 One month later, August 2015, Shane returned to HRBR for his hair transplant surgery, which was to be carried out using the Follicular Unit Extraction (FUE) method. This method involves transplanting individual hair follicles one by one without the need for linear incision. Shane was kept awake during the surgery and, because of local anaesthetic, couldn’t feel a thing. Over 400 follicles were gathered from the back of Shane’s head for transplantation before Shane took a well-deserved break.

Halfway through Shane’s surgery day, Brian O’Driscoll popped in to surprise him once more. He wanted to get an update on how the procedure was going and see how Shane was feeling. Both Brian and Dr Maurice Collins commended Shane on his bravery and courage in the theatre. As a parting gift, Brian presented Shane with his old Leinster rugby training bag, rugby socks and a signed jersey – something nice to focus on during his last 30 minutes of surgery when the gathered hairs would be transplanted into the scar area. Before leaving he wished him the best of luck in the future.

Everything went according to plan in Shane’s surgery and he will have the scrum cap back on in a few weeks’ time. In six months, the transplanted hair will begin to grow and camouflage his scar.

Every year, HRBR assists patients with scars like Shane. While the majority of HRBR patients experience male pattern hair loss, androgenetic alopecia, this is not always the case. Hair restoration can help patients like Shane conceal medical scarring on the head and live normal lives.