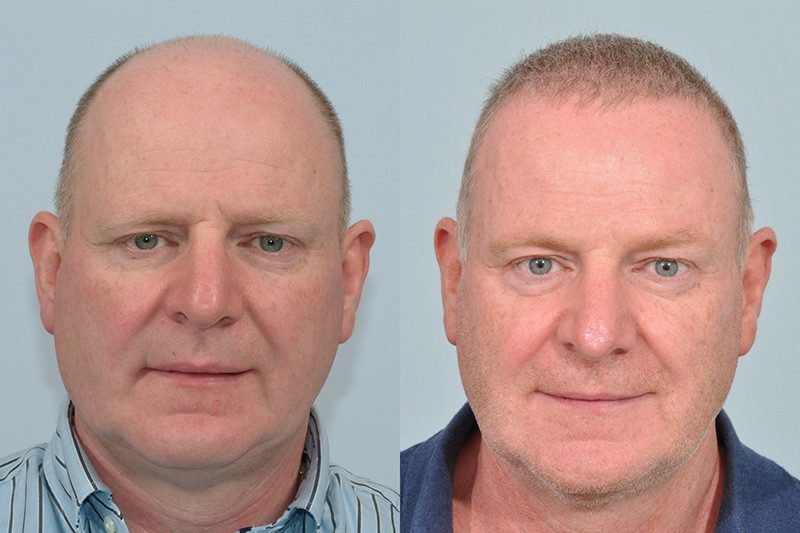 I was in my late twenties when I noticed I was beginning to get thin on top. This wasn’t an issue for me at that age as I liked to keep my hair short (a number 1 or 2 at most) and I was fit and trim. As I passed into my forties I had very little hair (none on top) but again wasn’t particularly bothered as I was living in a hot climate at that time and short or shaved heads was pretty much the norm. In any event, I had (what I thought) was a young face so my hair, or lack of it, wasn’t an issue with me.

As I moved thro’ my forties and was back living in Ireland I was becoming, with increasing speed, a bit more self-conscious of how I looked. My ‘baby-face’ was a distant past and my bald head aged me 10 years. This is all my perception but, when you are dealing with issues of self, well your perception is your reality. I wasn’t self conscious to the point of distraction but I was aware that in family photo’s I was looking older than I felt and, more often than not, this leads to feeling older than you look. To hell with this I thought. I decided to act.

I researched the topic and found HRBR and Maurice Collins. My first impression was that he was a fantastic advert for his own procedure but, as I was to find out later, Maurice’s hair is all his own and still in its original location. I subsequently could boast that my hair was all my own too except it had moved house and was raising a family a little bit north of where it was born.

You will have heard that the procedure, once you decide to go ahead, is pretty much pain free and simple (for you). There is no doubt that, in the days following, you must ‘water the garden’ strictly in accordance with Maurice’s instruction. He really does know best and, if you want the very best results, it would be silly not to follow those instructions to the letter.

I recall being at a meeting a day or two after my procedure and spraying every five minutes. I had no notion of hiding the fact that I had a procedure done. I was proud of my soon to be new thatch and carried on as if it was the most natural thing in the World. And guess what, it became the most natural thing in the World. I brought my spray bottle to a Dubs game in Croke Park and people behind me joked that they paid for seats under the Cusack Stand Roof but were still getting wet. They were from Mayo so I paid no heed. They were probably used to getting wet. Just kidding folks. The banter was great. I have always found that facing into an issue is the best way to deal with any of its down sides. A bit like hurling.  If you hang back you’ll get hurt at the end of a swing but if you get in close you stop the swing momentum and won’t get hit. I learned this after I hung back and nearly got the head taken off me. I gave up hurling. I’m not mad. And, unlike the great exponents of our wonderful game, I’m not that skilful either.

So, after my procedure the approach I took was head-on, so to speak. Not everyone will be comfortable with being open.  Whatever works for you is right for you. I recall Maurice saying to me that people would notice something different but won’t be able to put their finger on it. It’ll be ‘did you lose weight’ (by the way the answer to this is always ‘yes’) or, ‘are you wearing contact lenses now’. Whether it be vanity or necessity, if you decide to go ahead with this procedure then you’ve made a very good decision. When I choose to tell people about my procedure I sometimes get asked ‘why did you get it done’. My answer is always ‘because I could’.

I love my new hair and I still shave it to a two blade on the sides and back and I can go to a four on top. I have never regretted my decision to regain some of my lost profile. You won’t either.

Dr. Maurice Collins and his team are, in the words of Tina Turner, ‘Simply the Best’.