Female pattern baldness affects only around 20% of women, compared to over 50% of men as they get older. It is similar to its male counterpart but there are obvious visual differences. This blog post will underline what causes hair loss in women, paying particular attention to hormonal and medical factors.

Women tend to lose their hair in the forelock area, which is the zone behind the frontal hairline and on the top of the scalp. Unlike men, they tend not to lose all their hair from the affected areas – instead they are more likely to experience extreme thinning throughout. 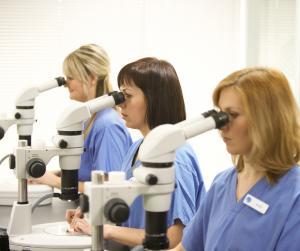 Scientists don’t yet understand why female and male pattern hair loss is different. An obvious explanation is that women have less of the hormone testosterone than men. This in turn means they have less dihydrotestosterone (DHT), which is the hormone that works on susceptible follicles to cause baldness.

In order for DHT to be created from testosterone there must be a significant presence of an enzyme called 5 alpha-reductase. Women have only half the amount of this enzyme as men.

In addition, women have significant levels of an enzyme called aromatase in their scalps. Aromatase is believed to block the formation of DHT and hence inhibit the pattern balding process. Women have particularly large concentrations of aromatase in their frontal hairlines, which may explain why women do not go bald in this area.

The system used to classify genetic hair loss in women is called the Ludwig Chart. It is a simple, but accurate, portrayal of the typical progressive stages of female pattern baldness. Those stages are described in the chart below: 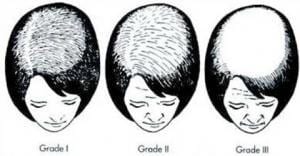 Apart from genetics, hair loss in women can arise from a variety of causes such as hormonal changes (including pregnancy), an underlying medical condition and stress. That is why the management of hair loss in women is different than it is for men.

Following the menopause, women are far more susceptible to hair loss than they were in their younger years. They develop significant levels of miniaturisation (thinner hair shafts and loss of hair), which often starts just behind the frontal hairline and extends to the back and sides of the scalp. This condition may be linked to the loss of estrogen hormones during the menopause which had previously served as protection against the male hormones that cause thinning.

Women who are pregnant often notice that their hair is thicker and healthier looking than normal. This is because pregnancy causes increased production of estrogen, which has a positive effect on hair growth. It causes more hair follicles to enter the anagen (growth) phase which means they are actively producing hair.

However, after the baby is born, estrogen levels drop and more hair lapses into the telogen (resting) phase. In a process similar to the one outlined above relating to menopause, miniaturising occurs and hair is shed during washing and brushing.

The good news is that hair loss during pregnancy should be a temporary issue. The follicles that have recently lost hair should return to a growth phase in two to six months, although it takes longer for nursing mums. At a rate of growth of around 1.5 centimetres per month, the woman can expect the normal appearance of her hair to return after around a year.

There are certain dermatologic scalp disorders that can result in hair loss, such as lichen planopilaris and alopecia areata. For more information on these conditions see our dermatology section.

Other underlying medical conditions that cause hair loss in women include anaemia, thyroid disease, connective tissue disease, gynaecological conditions, weight loss owing to severe dieting, and use of medication such as oral contraceptives, beta-blockers, vitamin A, thyroid drugs, prednisone and sedatives.

Although stress can speed up hair loss in women, it is not the primary cause of female pattern hair loss. The necessary combination of genes and hormones must be present to cause this condition and stress can serve to move that process along at a quicker rate.

Stress does cause a particular type of balding called telogen effluvium and women are more susceptible to this than men. Unlike androgenetic alopecia (pattern baldness), telogen effluvium is usually reversible. It happens when an unusually large number of follicles enter the telogen (resting) phase and this is followed by a shedding of the hair from those follicles. The result is often significant thinning. However new anagen (growth) hairs usually begin to appear in the place of those that were shed.

Telogen effluvium can be caused by severe mental anxiety. It can also be brought on by hormonal changes associated with childbirth, termination of a pregnancy, other types of surgery and high fever.

Treatment of telogen effluvium will be focused on the causative disease or the associated drug. Once the underlying problem has been treated, the hair usually re-grows in two or three months. If, after a year, the hair density has not been restored, it could be a case of the condition ‘unmasking’ dormant androgenetic alopecia (pattern baldness).

A particular type of telogen effluvium can result from hair transplant surgery. It’s often called shock loss and can result from an interruption of blood supply to local hair follicles by incisions made for receiving grafts. In this instance too, the hair is expected to recover in two to three months.

There are two main types of self-induced hair loss and both are far more common in women than in men. They are traction alopecia and trichotillomania.

Traction alopecia is caused by prolonged physical tension on the hair – the hair is literally pulled out over a long period of time. It can be caused by ponytails, pigtails, braids, tight roller curlers or repeatedly pulling the hair when straightening it. Traction alopecia can also be caused by hair extensions because these additions are attached to the existing hair. The condition is particularly common in women of African descent among whom braiding is common or Caucasian children who have wild curly hair.

Parents should note that this problem can start in childhood when they tie their little girls’ hair in pony tails and plaits. Persistent traction alopecia is irreversible and can lead to bald patches and scarring.

Trichotillomania is a term used to describe patients who continuously pluck out their hair. Hair is pulled out of the scalp in distinct patches or out of eyebrows and eyelashes. The resulting bald patches can be permanent and only fixable by a hair transplant. However, this is a psychological condition and should be treated as such first.

If your hair loss is caused by scarring resulting from burns or trauma or if you have female pattern hair loss (androgenetic alopecia), then you may be a suitable candidate for hair transplant surgery.

However, many of our female patients are not suitable candidates for hair transplant surgery because their hair loss is caused by one or more of the wide variety of other factors that cause women to lose their hair.

Hair transplantation involves the movement of hair from an area of greater density and fullness at the back of the scalp to an area of hair loss near the front, top or crown. Women who have generalised thinning (unpatterned alopecia) will have hair that is thin all over the head. This means that the donor area (back of scalp) will have weakened hair which will continue to thin over time, making it unsuitable for a transplant.

When hair is transplanted into a part of the scalp that is thin, but not completely bald, there is a risk that some of the hair that is weak will not regrow in its new location. There is also the possibility that the hair in the recipient area is fragile and some of it may be lost in the process called telogen effluvium (described above). However, it is usually reversible.

If you are suffering from hair loss and would like to discuss possible treatment options please contact us to request a consultation.

This article was updated on 18th June 2019. To read more about hair loss in women visit the ISHRS website.