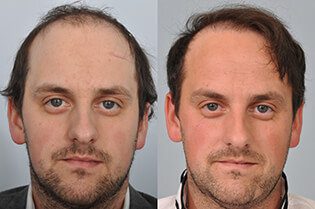 Hi, my name is Louis Blundell. I’m heavily into my sports, my martial arts, my acting. Anything to do with drama and the outdoors really.

I first started to notice my hair loss during actually one of our theatre shows. I think it was Peter Pan at the time, when our photo was taken and put up at the front of the theatre, and to see my photo was amazing, but at the same time I saw my hair was really really thinning out and it kinda stopped me dead in my tracks, and from then on it kind of escalated and I didn’t want to do any more theatre.

In fact I didn’t want to do anything anymore literally, I stopped everything. I didn’t go out.

I used to play music, I stopped doing that was well. Just ’cause what people might think of my appearance being on stage. Because I was lead guitarist. I was at the front as well. So at the time it was all about image. So when you haven’t much to gel up. Then once I started hating my hair. I started hating my body as well.

And at this time my partner, didn’t have a clue. Because she had never ever ever seen me without a hat on.

She literally for the three years I was with her. Even at night I wore a beanie, and slept under the pillow. So she couldn’t like kinda get a sneaky peak during the night.

When you think about it it’s actually mental. But that’s how you are. You get, I wouldn’t say it’s depressed. But, I’d say it’s in the same league as being depressed. You just literally just shut yourself away, and don’t do anything.

My aunt’s friend recommended us to come to over HRBR, and we actually got picked up from the airport, which was nice. And once you get in the building, even the reception staff, they treat you like family. Take you straight up, offer you all the sweets and fizzy drinks you want.

It feels very homely. It’s a very calming place to be. Even down to the doctors and nurses here, when they’re explain to you. They’re very. They want to know your side of it as well, and your opinions. As soon as I walked in.

You actually feel like you’re at a day spa. That’s what it basically feels like, being at a day spa. You don’t even feel them putting it in. You just sit there watching TV. It’s so relaxing. Even when they are talking to you. You can have a laugh and a joke when they are doing the procedure as well. It’s amazing really.

[cta number=”1″]The hardest part of the actual day is when I got home after the operation, and had to spray my hair every 15 minutes. It was a pain, especially through the night. I don’t think I’ve ever rung so many people in my family to talk to and keep them up, to keep me company through the night, to keep them up, to keep me awake. That was the only ordeal. But one day out of my life is nothing.

After about two weeks the transplant hair started falling out again. So you get a little bit disheartened at first. But then you know it’s going to grow back. So, at this time I was kind of. When I first had it done, it looked amazing, straight away, it looked like it was always there. Then after two weeks it goes away again.

So your confidence builds up for the first couple of weeks. Then it gets brought back down again when you start losing it. You think ah no. But then after a couple of months it starts growing back really really well, and then your confidence starts really. Mine literally shot through the roof.

This is basically the best and probably the most exciting decision I have ever made in my life. It’s has completely changed it.

I’d really, it’d recommend this to anyone who can go forward with it and get it done and do it. It will completely change your life. It really will.

My partner is actually thrilled to bits and now we got a five month old daughter. Life is just amazing. It can’t be any better.