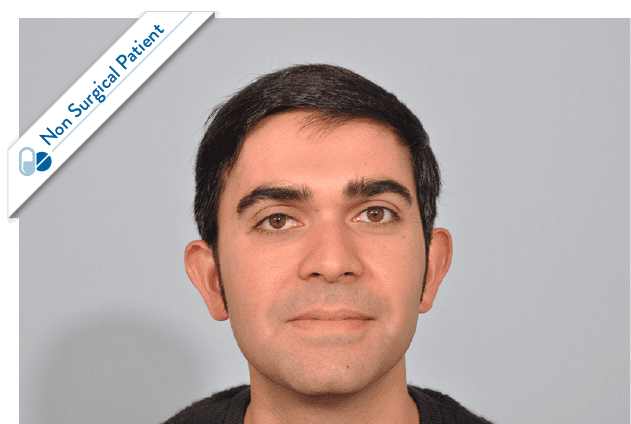 My Story about HRBR

My experience with hair loss goes back to when I was 22 years old. I noticed that my hair which had been very thick suddenly did not need to be cut as often and that I could actually manage it easier.

At this stage I was in denial and because it had been quite thick hair, I actually found the changes handy! However a year later I began to notice that a patch was becoming more visible around my crown and I had started getting a few jokey comments from friends about going bald. There was a history of male pattern baldness in my family and quite aggressive baldness at that. My father and all his brothers were quite bald by the time they were 30 and it was a similar story on my mothers side but a slightly less rapid onset. I knew I was unlikely to dodge the issue now so began to read online on the topic.

I think it is this phase that I would like the emphasize the vulnerability many men face with respect to this issue as the internet then as now provides a mixture of truth, half truth, science and complete nonsense. I got lost amongst all this and ended up at a well advertised “clinic” that had a famous sportsperson as its spokesman. My experience here immediately focused on me considering a menu of shampoos, laser combs and hair systems (modern toupees) and little was done to explain what was happening me medically or how I even felt about loosing my hair. There was certainly no mention of possible preventative treatment that might manage the issue.
The climax of the experience was being left alone in a room to watch a carefully constructed video that aimed at manipulating my insecurity about hair loss and I assume lead me to sign up to one of their treatments. Having a sales background I actually felt angry after this, I was putting myself through a high pressure sales pitch. I left the clinic determined to speak to someone that had actual medical training and could speak about the topic without forcing me to sign up to costly procedures at the age of 23. I now feel that what happens at this phase for young men can either lead to them giving up doing anything entirely or worse leads them to make choices on a solution that has little chance of making any lasting difference. This can be costly, embarrassing and make the person dealing with male pattern baldness fell like a complete fool. Of course if you end up making a fool of yourself at this stage its unlikely you will tell people about it and so these companies continue to prey on the vulnerable.

It was through more focused research after this experience that I became aware of HRBR and my initial consultation with Dr Collins was the complete opposite to what I has recently undergone in the “hair clinic”. He gave it to me straight that my genetic history meant that male pattern baldness was indeed part of my future but that nothing needed to be done about that. He then asked me how I felt about going bald and made clear that I was at too early a stage for any invasive treatment and then informed me on the drug treatment options that had been scientifically proven to help slow the onset of the condition. This involved finasteride, Minoxidil (Rogaine) and Nizoral shampoo. As I still had plenty of hair still this seemed the best route forward as I personally wanted to try getting into my 30s with my hair. There were no guarantees made on how I would respond but luckily after six months I began to notice an improvement and the affordable treatment plan has halted significant loss in its tracks for the past 11 years. A years supply of the treatments in fact works out about the same as a month or two of some of the options I was shown at the other clinic.

I would like to finish by saying there is nothing wrong with going bald, in fact it suits lots of men but there are a sizable amount of men specifically younger men who would like to keep their hair especially through their 20s & 30s. It is out of your control and is a loss of a physical part of you that has been with you since childhood. This differentiates it from many other cosmetic type procedures which aim to change or augment natural parts of you. When the awareness of baldness starts it can lead to all sorts of mixed emotions. I have heard commentary denigrating men who wear toupees and stress about loosing their hair and it for them I decided to share my experience. Not every man will go bald so it is not actually just a fact of life. Some men might not feel they look better bald and without getting into a detailed gender debate I would like to point out that when a woman looses her hair for whatever reason a much gentler attitude is taken even if she is forced to wear a wig. Brave women actually speak eloquently on the impact hairloss has had on them emotionally which illustrates it is a human issue as opposed to a male or female one.

If it is of concern I would recommend speaking to properly qualified medical specialist like the team at HRBR who can provide a real menu of options and also explore your actual thoughts and feelings on the issue. For younger men preventative treatment can be very effective as it has been for me over the past decade and while it is not a cure and will eventually wear off it can be a non invasive way to manage the issue while you consider other options and how you really feel about hairloss. Be very cautious of miracle cures, combs or shampoos in my experience the claims were highly misleading & expensive!!!