Alopecia areata (AA) is a hair loss condition of unknown cause. Genetic and immunological factors are probably involved as well as possibly infectious agents, cytokines, emotional influences, abnormal melanocyte s and keratinocytes and neurological functions. 10-42% of affected individuals give a positive family history of AA especially those who have an early onset of the disorder. The association of Alopecia Areata with the presence of auto antibodies in the system has given weight to the concept of it being an auto immune process. It frequently co-exists with auto immune diseases such as pernicious anaemia, LSE, polymyalgia rheumatica, ulcerative colitis and other auto immune processes.

Alopecia areata affects 0.1-0.2% of the population at any one time and has a lifetime risk of 1.7%. 60% of patients experience their first episode under the age of 20. Patients usually present with an abrupt episode of hair loss commonly in round or oval patches involving not only the scalp hair but any hair bearing area such as the beard, chest, axilla or arms. The hairs frequently fracture and expand at fractured ends resulting in a shape described as “exclamation mark hairs”. Sometimes the whole scalp or even the whole body hair may be lost resulting in a pattern known as alopecia totalis or alopoecia universalis respectively.

The prognosis for recovery is always uncertain. Resolution may be early or several episodes of hair loss or recovery may co-exist or ensue.

Many treatment protocols for alopecia areata have been developed.

These may be used either topically or injected into the lesion or used systemically.

This drug promotes follicular DNA synthesis. It is used as a 5%solution.

This agent is used as a non specific immuno-modulating medication.

This is used to modify T-cell function and antigen preservation in the hair.

Use of this agent is controversial due to its high side effect incidence and overall efficacy. The University of California and the University of British Columbia have developed the treatment protocol outlined below. This was formulated by Doctors Jerry Shapiro, Vera H. Price and Harvey Loui who are among the world’s most respected authorities on alopoecia areata. 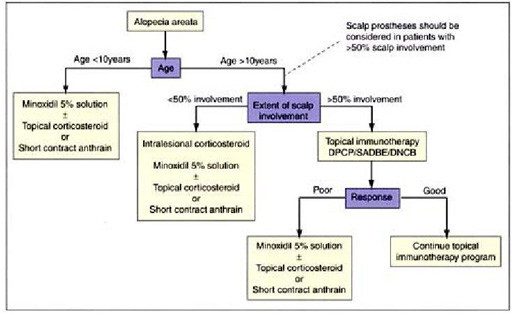 Hair surgery as a treatment for Alopecia areata

Hair surgery has little, or no, role in the management of this condition because the transplanted hairs are destroyed by the same auto immune process. Early treatment with one of the above mentioned regimes is, therefore, advisable and patients are advised to consult their General Practitioner as early as possible for referral to a clinical dermatologist or immunologist experienced in the use of the many treatment regimes. In the unlikely circumstance of there being small persistent areas of hair loss, these might be usefully transplanted at a late stage when the auto-immune process is then quiescent. The certitude of this, however, is unlikely until approximately 15 years after the initial episode.